Home › Blog › Outperforming AIM: The success of BR managers during times of volatility

AIM lost over 20% of its value during the market volatility of the final quarter of 2018.

However, investment managers can outperform the overall market and many have a track record of doing so, meaning that investing in their products can help to provide some mitigation in the event of a market downturn such as that witnessed in Q4 2018.

Figures from MICAP show that the majority of BR managers were able to outperform AIM, which suffered an overall 19% drop from the start of January 2018 to the end of the year. This compares with an average of -15% for the performance of the 21 portfolios tracked by MICAP in this area over the course of 2019. 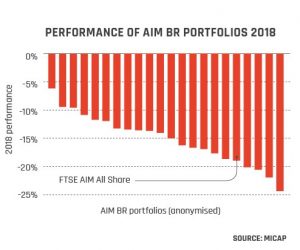 As the data for these portfolios show, the majority performed in the negative mid-teens during 2018, somewhat better than the overall AIM market. This demonstrates the importance of experienced stock picking and being able to find sectors and stocks that are not driving the downturn. In the final quarter of 2018, it was almost impossible not to be affected by the volatility, but through careful stock selection some managers were able to avoid the worst of the downturn.

Looking back over the previous two years, the same portfolios have provided strong performances. Of the 18 offers that were tracked in 2016, just one outperformed the FTSE AIM All Share index, although many coalesced around the index’s 16.1% growth over the course of the year. 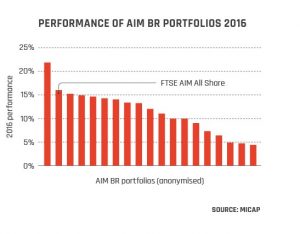 Meanwhile, in 2017, seven portfolios managed to beat AIM’s impressive 26% growth, while six more were above or near the 20% mark. 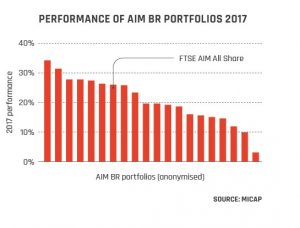 This demonstrates the importance of considering AIM investments over the long term and this is further highlighted by the annual year-on-year price volatility of AIM BR portfolios. Notably, 2018’s fall was the first since the global financial crisis of 2008 – and is far less severe. Given the performance of the AIM market since the start of 2019, it is unlikely that the market will follow the trend seen in 2007, when a relatively small fall precipitated the global financial crisis the following year. 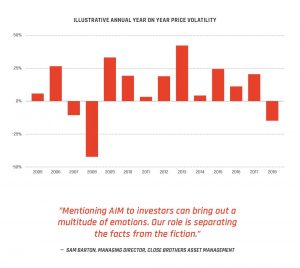 This piece has been published as part of the Alternative Investment Market Report 2019. For the full report click here